Starting from humble roots in the 1800s, Washington is now the second-largest wine-producing state in the country. Its wines, from robust Cabernet Sauvignon to dry Riesling, are acclaimed worldwide. The state now boasts more than 50,000 acres of grapes and over 1,000 wineries. As the third-oldest operating winery in Woodinville, DeLille Cellars is considered a strong influence in establishing Washington as a premier viticultural region. However, this booming growth didn’t happen overnight and it’s important to understand the rich history that has shaped Washington wine today.

The Beginnings of Washington Wine

In 1825, Washington’s first grapes were planted at Fort Vancouver on the north bank of the Columbia River. These grapes were planted by the Hudson’s Bay Company and although it is unknown if wine was ever produced from these plantings, the opening of the Oregon Trail brought the next wave of grapes and a newfound interest in winemaking. French, German, and Italian immigrants pioneered Washington’s earliest plantings. By 1854, hybrid varieties were seen in nurseries in the Puget Sound region and just 10 years later, the first wine grapes were planted in the Walla Walla Valley (washingtonwine.org).

The 1900s brought large-scale irrigation projects harnessing mountain run-off from the Cascades and enabled vineyards in the Yakima and Columbia Valleys to thrive. By 1914, several important vineyards had appeared in the Yakima Valley, most notably the vineyards of  William Bridgman, deemed the “Grandfather of Washington Wine”. Bridgman planted some of Washington’s oldest vines on Harrison Hill and nearby in the Snipes Mountain AVA.

In 1962, Harrison Hill was nearly forgotten and sold to Associated Vintners (now known as Columbia Winery), who planted Cabernet Sauvignon throughout the area. In the early years at DeLille Cellars, Chris Upchurch was mentored by David Lake, a Master of Wine and head winemaker for Columbia Winery. Lake and Upchurch visited the old vineyard and discovered the mature Cabernet Sauvignon vines between other varieties such as Gewürztraminer, Pinot Noir, and Riesling.

While the vineyard was selling primarily to Chateau Ste. Michelle at the time, the winemakers had no plans to feature Harrison Hill grapes in their wines and agreed to let DeLille take it over. The team removed everything except the acre of 1962 Cabernet Sauvignon and replanted Merlot, Cabernet Franc, and additional Cabernet vines.

Harrison Hill Vineyard is home to the second oldest Cabernet Sauvignon vines in Washington State, used primarily in DeLille’s single-vineyard red blend, aptly named Harrison Hill. The blend shows distinctiveness and elegance and is complex, expressive, and exhibits “somewhereness”. "At DeLille, we believe terroir is a special thing. To have terroir, you have to stand out. We often call it 'somewhereness' which many of our wines tend to have," remarked Chris Upchurch, Founding Winemaker of DeLille.

Today, owner Steve Newhouse makes certain the yields on the vineyard are some of the lowest in the state. In an interview, Upchurch told Great Northwest Wine, “One thing all good winemakers have in common is we all seek old vines. As far as old vines are concerned, the yields are lower, and it also means they mature and ripen slower, which means the flavors catch up before the sugars get too high.” 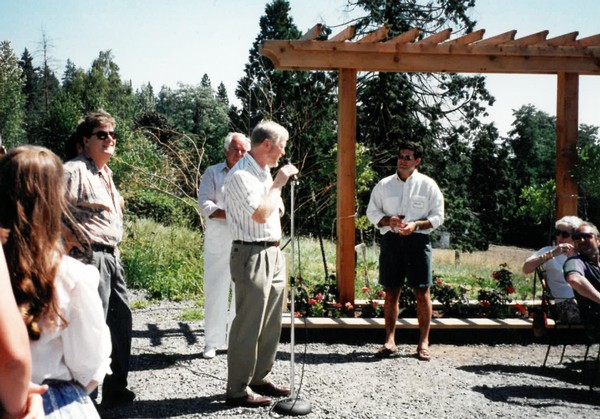 The surge in Washington wineries can largely be credited to the research of Walter J. Clore, commonly referred to as the “Father of Washington Wine”. Clore’s research around grape growing in Washington state was essential in defining the area as a premier growing region and proving the ability to compete with California wines. In 1969, Washington legislature prohibiting the widespread growing of fine vinifera grapes was repealed, providing access to quality grapes at lower prices.

With a solid foundation, the Washington wine industry exploded in the late 1970s and 1980s. Washington families were planting more vineyards while demand skyrocketed for local Chardonnay and Merlot. A shift in consumer trends brought about the “Merlot Craze” of the 1990s. In 2000, there were approximately 74 wineries in Washington State and by 2010, that number had tripled.

Founded in 1992 by Chris Upchurch, Jay A. Soloff, and father and son Greg and Charles Lill, DeLille Cellars pioneered some of the first Bordeaux-style blends in Washington state. Upchurch and Soloff had met in 1974 and dreamed of entering the wine business together. In May of 1992, Greg and Charles Lill were trying to decide on a use for their 10-acre farm in Woodinville. Soloff met Lill through the Rotary Club and suggested a winery. Although Chateau Lill is no longer used for DeLille Cellars production and the winery is now located at The Old Redhook Brewery just down the road in Woodinville, it remains a fundamental and significant piece in the winery’s history.

Noted in The Wine Project, Upchurch insisted “All I want is to make a top-quality wine. I have experience in tasting expensive, great wines. When we tasted our first wines against some of the best wines in Bordeaux, we blew them out of the water. We had, then, a model of wine that we were trying to make. It is a Medoc style of wine, I think reminiscent of St. Julien.”

In an interview with Owen Bargreen, Jason Gorski reflects on his first winemaking opportunities in Washington. “It is not only the quality of the wine [as] it is making the connection with the people that drink it. A lot of the people that came there year after year made it like a family experience. I try to translate that at DeLille. The interaction that I have with people is significant and I want them to feel like there is a family experience here.”

Today, DeLille has crafted over 200 wines with successive vintage ratings of 90+, totaling over 700 individual 90+ scores from leading critics. DeLille Cellars holds the coveted position in the 'Top 100' Guides of Wine Spectator and Wine Enthusiast for both red and white wine (D2, Signature Syrah, Chaleur Blanc), as well as being honored as a Wine & Spirits Top 100 Winery (2017-2020) and Wine Enthusiast Wine Star - Top Five American Wineries.

How is Washington, a state typically known for moody skies and steady drizzle, a leading producer of wine? While this isn’t a surprise for locals, those residing outside Washington are surprised to hear the majority of the state (east of the Cascades) receives a mere eight inches of rainfall each year. Irrigation from the Columbia, Yakima, Snake, and Walla Walla rivers combat the lack of moisture, creating an ideal environment for premier wine grapes.

A Tribute to the Past and Future of Washington Wine

In an interview with Paul Zitarelli for Seattle Magazine, DeLille was asked to choose two wines to represent the past and two to represent the future. Although the older wines are not for sale, they reveal a glimpse into Washington’s rich history.

“DeLille helped to pioneer not only Bordeaux-style reds in Washington, but also dry Bordeaux-style whites, which are blends of Semillon (in this case, 43 percent) and Sauvignon Blanc (57 percent). This pours into the glass deep gold, befitting its age, and offers a lovely nose of fig, date, and golden plum fruit, complemented by savory maturing notes of hay and straw. Still very much alive, with a bright vein of acidity balancing rich, creamy fruit. Truly an outrageous, eye-opening showing for a white wine 16 years past vintage.”

The Past: 1998 Chaleur Estate Estate

“A fine example of DeLille’s longtime focus on Red Mountain fruit, which comprises 72 percent of this wine, this Chaleur Estate is a blend of 66 percent Cabernet Sauvignon, 24 percent Merlot and 10 percent Cabernet Franc. It offers a beautiful mature nose: a mix of fresh and dried red fruits, earthy brewed coffee and a savory kick of soy sauce. The texture is rich and supple, any rough edges long ago sanded down by the power of bottle age.”

“D2 is DeLille’s highest production wine and one of its finest. For the 2014, the blend is 58 percent Merlot, 36 percent Cabernet Sauvignon, 5 percent Cabernet Franc and 1 percent Petit Verdot. It comes from more than a dozen vineyards scattered across Washington, including luminaries such as Red Willow, Klipsun, Boushey, Harrison Hill and DeLille’s own estate site, Grand Ciel. Deep, intense black fruits (blackberries, black cherries) are complemented by threads of smoke, earth and cedar, all in an openly delicious, pleasurable package. Pairs with: Seared duck breast, medium rare, with a cherry gastrique.”

“Four Flags is a newer wine for DeLille that began its life as a wine-club-only wine. It is 100 percent Cabernet Sauvignon and comes from four vineyards on Red Mountain: Grand Ciel (42 %), Upchurch (31%), Ciel du Cheval (19%) and Klipsun (8%). Aged for 20 months in French oak (75 percent new), this wine shows the open power and toothsome chew of good Red Mountain Cabernet, with robust tannins framing a core of black plum, cassis, and star anise. Pairs with: A garlic-studded standing prime rib roast.”

The Future of Washington Wine

Washington’s wine industry has grown exponentially in the last several decades and has no plans to stop. Washington wine is naturally sustainable - cold winters and hot, dry summers deter pests and offer ideal growing conditions. A strong commitment to research from the Washington State Wine Commission and partner programs at Washington State University ensures a bright and sustainable future for the industry.

DeLille Cellars is honored to be a founding contributor, alongside Chateau Ste. Michelle and Woodinville Wine Country, to create an endowment (The Woodinville Wine Country Diversity Scholarship) through the Washington State University Viticulture & Enology Program. “This is a small but important step to creating more inclusivity and diversity within our wine community,” said Tom Dugan, CEO of DeLille Cellars. “WSU has a world-class viticulture and enology program, and we’re honored to partner with Chateau Ste. Michelle and Woodinville Wine Country in creating this scholarship. It reflects the great collaboration and community of Washington wine.”

DeLille established its new headquarters at the Old Redhook Brewery in 2019, moving production in January of 2019, and building a three-story tasting room at the site which opened in December of 2019.  In June, DeLille opened a wine-centric restaurant, The Lounge at DeLille Cellars, in the old brewery pub location.  DeLille will be celebrating its 30th Anniversary in 2022 and is looking forward to a bright future for Washington wine

DeLille Cellars’ passion lies in showcasing the powerful, concentrated, and structured fruit of Washington state through the European art of blending. Director of Winemaking and Viticulture Jason Gorski stated, “there’s a lot of people that touch the vine and touch the grape long before it gets here in the winery and I want to honor that legacy, passion, and hard work”. 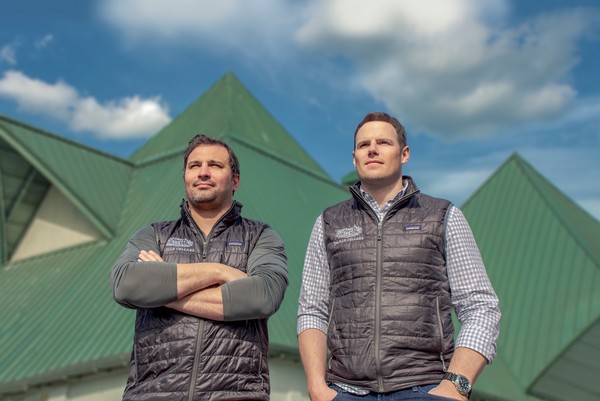 Director of Winemaking and Viticulture Jason Gorski and CEO Tom Dugan in front of the iconic roofline at the Old Redhook Brewery, the new home of DeLille Cellars.