WOODINVILLE, WA (March 3, 2021) – DeLille Cellars, Woodinville’s third oldest winery, has announced that it is expanding at the Old Redhook Brewery in Woodinville.  DeLille will be launching a new wine and food experience at the former Wheelhouse restaurant (originally Redhook's Forecaster's Public House).  Located adjacent to DeLille’s winery and tasting room, The Lounge at DeLille Cellars will offer unique glass pours, flights, food and wine pairings, and spaces for private dining and small events.  Come summer, the former patio will open as The Deck with an expanded menu.  A remodel is underway, with DeLille aiming to have the space open in late spring or early summer.

The menu and food will be directed by Executive Chef Michael C. Toni, who has worked with DeLille for nearly two decades catering private events and wine release dinners, as well as curating food and wine pairings at DeLille’s tasting room.  Most recently, Chef Toni has been in charge of DeLille’s “Date Night” meals, a weekly takeout dinner and wine experience that has been a huge success since the first COVID-related closures in March of 2020. 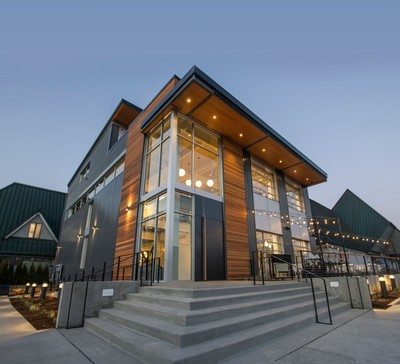 “We’re excited to offer our customers some different and unique wine and food experiences,” said DeLille Cellars CEO Tom Dugan.  “As someone who took the Burke-Gilman and Sammamish River Trails out to Redhook years ago, we’re especially excited to launch an outdoor space when the weather cooperates, even more so with the slated Eastrail project that will bring more people by foot and bike to Woodinville,” added Dugan.

“The focus of our tasting room has always been about education and showcasing the world-class quality of Washington wine.  The Lounge allows us to offer more casual experiences, both by-the-glass and into the evening, that our wonderful customers have been looking for,” added Deb Stadelman, DeLille’s Director of Retail Operations.

With the move of its winery and remodel of the former brewery, DeLille established its headquarters at the Old Redhook Brewery in 2019.  The expansion into the restaurant comes just over a year after DeLille opened its brand new three-story tasting room at the site, and marks nearly three decades since the winery’s founding in 1992 (DeLille will celebrate its 30th harvest this fall).

The former Forecaster’s Public House has a long history in Woodinville as a gathering spot since 1994 when the Redhook facility first opened.  Sparkman Cellars also relocated to the Old Redhook Brewery, with winemaking activities and a new tasting room in Redhook’s former bottling facility.

DeLille Cellars is the third oldest operating winery in Woodinville, WA, founded in 1992. Known for pioneering Bordeaux-style blends from Washington State, the winery has maintained a tradition of quality and excellence with over 700 individual 90+ ratings from leading publications. DeLille Cellars focuses on the Red Mountain AVA and sources grapes from Washington's most acclaimed vineyards. The winery is recognized by notable wine critics and influencers, including Robert Parker, as one of the top producers in the state. To learn more about DeLille Cellars, visit www.delillecellars.com.