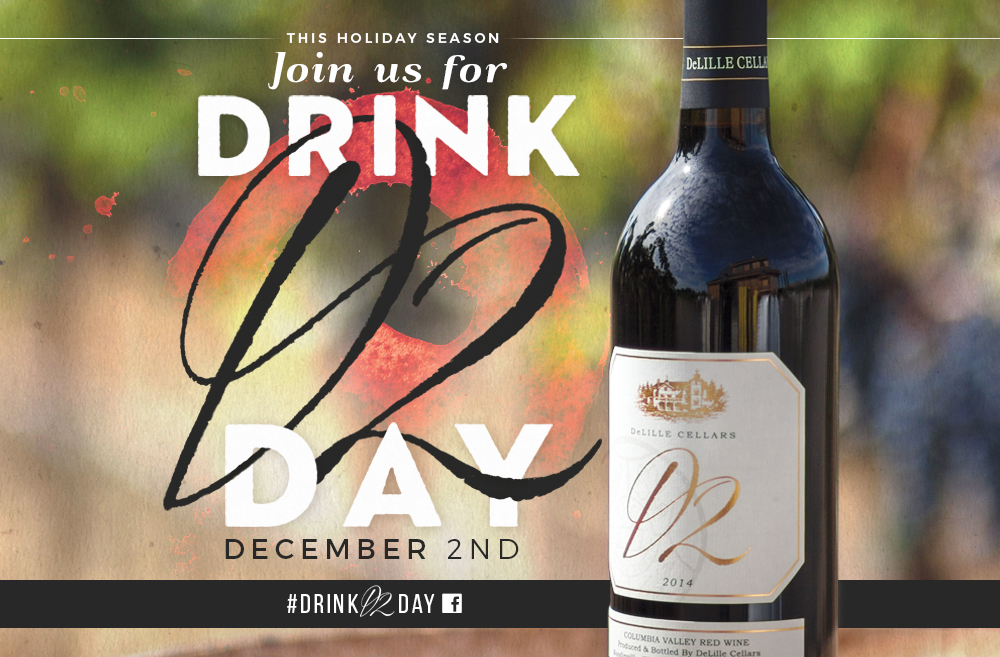 Woodinville, WA, November 15, 2017 ---- On December 2nd, DeLille Cellars will celebrate its first annual “Drink D2 Day” in tribute to one of its founding wines, D2.  One of two blends first made by DeLille Cellars in 1992, D2 pioneered the way for Bordeaux-style blends in Washington State.

Drink D2 Day requires no ticket to participate. Simply enjoy a glass (or bottle) of D2 on Saturday, December 2nd, and share your experience online (@delillecellars, #drinkD2day). Whether it be at home in front of the fire or out celebrating with friends, DeLille Cellars hopes you will toast to the season and help celebrate the winery’s 25th Anniversary and passion for Washington wine.

“One of Washington's founding Bordeaux blends, D2 established the immense potential of this region, and exemplifies the dedication and relentless effort and care of our growers and winemakers.  Please join us on Drink D2 Day (or any day) in raising a glass to the spirit, growing tradition and reputation of Columbia Valley wine,” said Winemaker Jason Gorski.

DeLille Cellars will also have a special offer on D2 through the weekend (December 1 – 3) at its locations in Woodinville and Kirkland, as well as online at www.delillecellars.com. D2 fans can also participate in the “Favorite D2 Memory” contest and be entered to win large format bottles of D2 for only $2. Entries due by November 24th at www.delillecellars.com/drinkD2day.

“D2 is a traditional blend of Bordeaux varietals sourced from over 15 of Washington State’s most prestigious vineyards. It is a great tribute to our craft of blending in an old-world style, while showcasing the power and structure of Washington State as a world-class wine region,” said Executive Winemaker Chris Upchurch.

D2 was recently awarded a Wine & Spirits “Year’s Best US Cabernet Blends” and a Seattle Met Top 100 award, with gold awards in coveted competitions such as the San Francisco Chronicle Wine Competition and Sunset International Wine Competition. D2 has received scores over 90+ from top publications for every vintage (rated since the second vintage in 1993). In a recent review from Jeb Dunnuck for Robert Parker’s Wine Advocate, Mr. Dunnuck said of D2, “…from a who's who list of vineyards in Washington State, this beauty has tons of upfront fruit, as well as a firm, nicely structured core. Hats off to the team at Delille for consistently producing this level of quality at this quantity.”

Founded in 1992 by Charles and Greg Lill, Jay Soloff and celebrated winemaker Chris Upchurch, DeLille Cellars is a boutique artisan winery located in Woodinville, Wash. Known for pioneering Bordeaux-style blends from Washington State, the winery has maintained a tradition of quality and excellence with over 200 highly-rated wines with a scores of 90+. DeLille uses the Red Mountain AVA as its foundation and sources grapes from Washington's most acclaimed vineyards, including Ciel du Cheval, Grand Ciel, Upchurch, Red Willow, Sagemoor, Klipsun, Boushey and Harrison Hill. The winery is recognized by notable wine critics and influencers, including Robert Parker, as one of the top producers in the state, and the winery was recently honored as a Wine & Spirits 2017 Top 100 winery in the world. To learn more about DeLille Cellars, visit www.delillecellars.com.